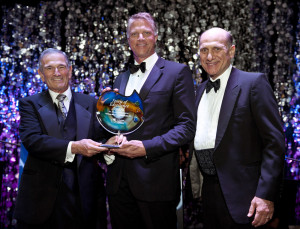 “We are privileged to recognize each of these honorees for their contributions to healthcare, which are continuing to fuel discoveries that hold promise for patients around the globe,” said David I. Meyer, PhD, LA BioMed president and CEO. “A prestigious group of business and community leaders will be joining us at the Oct. 18 Advancing Innovation Gala to celebrate the many accomplishments of our honorees.”

LA BioMed will present its Spirit of Excellence Award to Dr. Cooke, for his leadership of Novadigm Therapeutics, a company founded by LA BioMed researchers to develop a new generation of vaccines for fungal and bacterial infections. The company is focused on a leading cause of death, hospital-acquired infections. Once approved, the vaccine can be administered before a planned hospital stay but is likely to be effective even if it is administered at the start of an unplanned hospital stay.

LA BioMed also will present a Spirit of Excellence Award to Mr. Leonard for co-founding Kythera Biopharmaceuticals, a pioneer in aesthetic medicine that is bringing to market a technology licensed from LA BioMed. The first product of the company is ATX-101, which was originally intended for the treatment of a type of benign tumor but has since been shown to remove fat beneath the chin. Kythera, which is based in Westlake Village in Los Angeles County, is in the process of testing the product’s effectiveness in reducing double chins.

The third recipient of the Spirit of Excellence Award will be Dr. Niihara, an LA BioMed researcher, who co-founded Emmaus Medical Inc. to research and develop a novel new treatment to relieve the pain crises of sickle cell disease. He serves as CEO, president and director of the Torrance-based company. The treatment Emmaus is developing could help millions of people living with sickle cell disease, largely in underserved populations in the U.S., Africa and East Asia.

Dr. Criley will receive special recognition for his role in the creation of the Los Angeles County Paramedic Unit in 1969, which trained firefighters to deliver emergency care for heart attacks and other medical emergencies both before and during the patient’s transport to the hospital.

The unit’s success was publicized on a television show at the time, “Emergency,” leading to widespread adoption of the paramedic model – a major improvement in the delivery of emergency care that has saved millions of lives in the U.S.

“With even more extraordinary scientific breakthroughs on the horizon, and despite federal funding constraints, this is both an exciting and challenging time for biomedical research,” said Rodney D. Franks, LA BioMed vice president for development. “We rely on our supporters to help us continue to make the type of innovative discoveries we will celebrate at this year’s gala.”

The Advancing Innovation Gala will be held at the Ritz Carlton at LA Live, 900 W. Olympic Blvd., Los Angeles, CA 90015. For tickets to the gala, please contact Lisa Bosnich at lbosnich@labiomed.org or 310-222-4240.