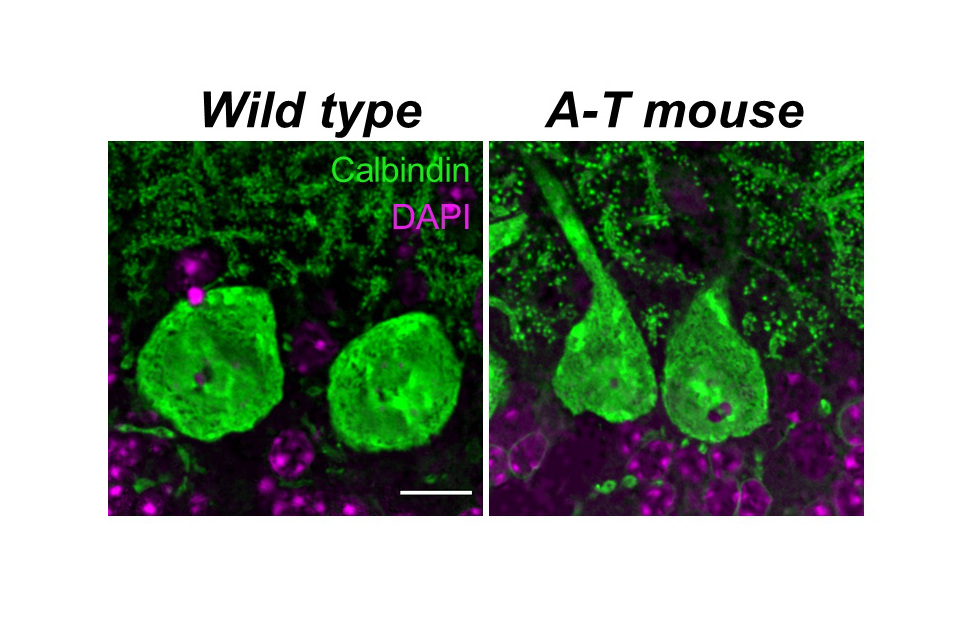 The Lundquist Institute’s investigators have developed a critically needed mouse model of Ataxia Telangiectasia (A-T), a currently untreatable, rare childhood disorder that results in a severe and progressive loss of motor coordination and premature death by 30 years of age. The disorder is caused by recessive genetic mutations in the A-T mutated (ATM) gene that prevent the production of an important DNA repair pathway protein referred to as ATM. This new mouse model represents a major breakthrough in A-T research, as it is the first A-T animal model to recapitulate the vast majority of clinical symptoms, most importantly the disorder’s hallmark severe loss of motor coordination (ataxia) and brain atrophy. With it, investigators are poised to provide much needed answers to why ATM deficiency causes selective atrophy of the cerebellum, an important motor coordination center in the brain that is implicated in several ataxic disorders, including A-T.

Beyond gaining a better understanding of A-T and the brain, investigators developed the A-T mouse to provide an in vivo, preclinical animal model to test their promising new Small Molecule Read-Through (SMRT) therapeutic currently being developed at the Lundquist Institute. In nearly half of A-T patients, ATM deficiency is caused by a nonsense mutation in the ATM gene that produces a premature termination codon thereby halting protein production. Our new mouse model harbors a clinically related nonsense mutation found in a population of North African A-T patients. Proof-of-principle experiments demonstrate that the SMRT therapy restores ATM production in SMRT compound exposed tissues harvested from A-T mutant mice. The complete study is published in the journal eLife. “This noteworthy breakthrough is a big step forward in developing effective therapeutics for A-T,” said Paul Mathews, PhD, Lundquist Investigator, Co-Director of the Neurotherapeutics IWI and Assistant Professor at the David Geffen School of Medicine at UCLA and Lead Investigator on the A-T study.

“My colleagues and I are excited to have developed the novel mouse model to test how ATM deficiency causes cerebellar pathology and ataxia and to have also demonstrated that ATM production can be restored by a promising new therapy being developed in the lab. Until now we have been working under severe limitations by not having a suitable preclinical model for therapeutic testing especially for a rare disorder like A-T. This makes all the difference for testing previously proposed therapeutic candidates for the disorder.”