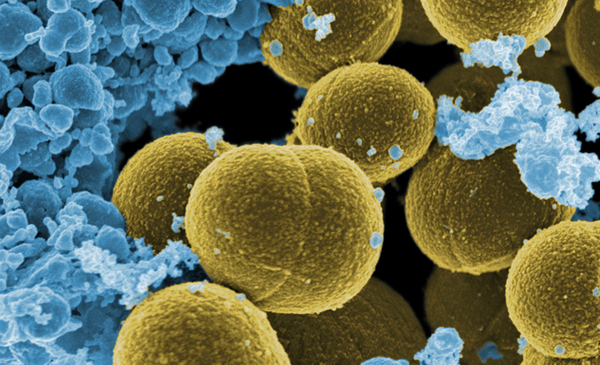 LOS ANGELES – (Dec. 8, 2014) – In the U.S. and around the globe, skin and soft tissue infections caused by methicillin-resistant Staphylococcus aureus (MRSA) continue to endanger the health and lives of patients and otherwise healthy individuals. Treatment is difficult because MRSA is resistant to many antibiotics, and the infections can recur, placing family members and other close contacts at risk of infection.

A study reported today in the Proceedings of the National Academy of Sciences USA holds new hope for preventing or reducing the severity of infections caused by the “superbug” MRSA. In the study, infectious disease specialists at the Los Angeles Biomedical Research Institute at Harbor-UCLA Medical Center (LA BioMed) reported that a new investigational vaccine, NDV-3, employing the recombinant protein Als3, can mobilize the immune system to fight off MRSA skin infections in an experimental model. The researchers found the vaccine works by enhancing molecular and cellular immune defenses of the skin in response to MRSA and other S. aureus bacteria in disease models.

“This is the first published study to demonstrate the effectiveness of a cross-kingdom recombinant vaccine against MRSA skin infections,” said Dr. Michael R. Yeaman, lead author of the study. “NDV-3 is unique as it is the first vaccine to demonstrate it can be effective in protecting against infections caused by both S. aureus and the fungus Candida albicans. NDV-3 represents a novel approach to vaccine design.”

The research team found the NDV-3 vaccine reduced severity and progression of skin infection in a model of the MRSA-caused disease, and prevented MRSA invasion from the skin to deeper tissues. The team said these findings support further evaluation of NDV-3 to address disease caused by S. aureus in humans. NDV-3 has been licensed to NovaDigm Therapeutics, Inc. and has already been found to be well-tolerated and capable of producing immune responses in human clinical trials similar to those observed to be effective in the present disease model.

A vaccine to prevent or minimize infections caused by S. aureus could significantly improve public health because this pathogen is the leading cause of skin and skin structure infections, which can lead to life-threatening blood infections. It is also a significant cause of surgical or traumatic wound infections, diabetic skin lesions, bloodstream infections and pneumonia or endocarditis.

NovaDigm is developing innovative vaccines to protect patients from fungal and bacterial infections, which can be recurrent, drug-resistant and in some cases, life-threatening. The Company’s founding scientists from the Los Angeles BioMedical Research Institute at Harbor-UCLA Medical Center (LA BioMed) are recognized leaders in the field of infectious disease and the emerging threat of “superbugs”. Their work has been largely funded by the National Institutes of Health National Institute of Allergy and Infectious Diseases (NIH NIAID). NovaDigm’s lead product candidates target Candida, a fungal pathogen, and Staphylococcus aureus, including MRSA. Based in North Dakota with additional research activities at LA BioMed, NovaDigm has received funding from Domain Associates, a leading U.S. health care venture capital firm and RusnanoMedInvest (RMI), a Russian venture capital firm. The company also collaborates with multiple government agencies.